Some thoughts from my world wanderings

Given the stormy conditions of the previous day and the fact that it had impeded our diving by forcing us to do 2 dives on the same ship (don’t get me wrong, the dives weren’t bad, but when you only have 3 days you want to see as much as possible) we opted to change our rest day to today and dive the next day in hopefully non-stormy conditions. We awoke to literally a gale a’blowing and immediately realised we had made the best choice. Orkney is made up of a cluster of different islands and with the luxury of the car we were able to drive around and explain this remote Scottish outcrop. One of the things that Orkney is most famous for is it’s Neolithic history and so we set out to explore on a very dreary day after making the most of a lie-in and enjoying a decidedly average breakfast at The Ferry Inn.

Given our location we were closest to the standing stones and so as a result decided to start there. However, given the torrential rain and heavy winds this decision may not have been the most sensible of choices. The Standing Stones of Stenness are visible from the road you can park in a layby just next to the stones themselves. Although the site today lacks the encircling ditch and bank, excavation has shown that this used to be a henge monument, possibly the oldest in the British Isles. Radiocarbon has suggested that work began here as early as 3100 BC. The stones are a lot further apart than Stonehenge and so you can get up close to them and view the henge from various points. However, after being out of the car for maybe 3 minutes I was completely drenched through and so retired to sit in a puddle of rain in the car. At this point we decided to try and check out an indoor activity and so made our way to Maeshowe to wait out the rain. Unfortunately, we were not the only ones with such an idea and the attraction was fully booked until later that afternoon. We weren’t having much luck and so decided instead to go in search of the gin distillery. 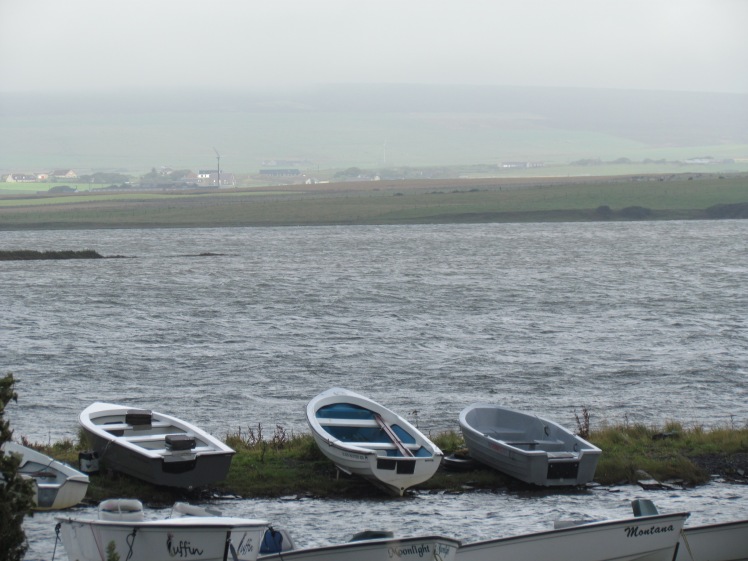 There are not one, but three gin distilleries on Orkney. The most famous (and least good in my view) Kirkjuvagr, now has a location in Kirkwall on the mainland. However, when googling the Orkney Gin Company which is distilled in Burray there was an address of what we assumed to be a shop/tour. Orkney Distilling Company is the smallest production of the 3 and doesn’t have any facilities for visiting. So we set out to Burray in the very heavy rain to find the gin place. We stopped on the way at the Orkney Wine Company near the Italian chapel who kindly offered us a free tasting of their many fruit wine products. I was pleasantly surprised and even ended up purchasing a few of them! After our wine we were set up for some gin and crossed the 2 barriers to Burray. We followed the google maps postcode and ended up in a small housing estate. We explored a little further along the dirt track leading to a farm and went back to the houses and wandered around but to no avail. We even asked in the local shop who assured us it was along in the direction we had been. After well over an hour we gave up – only to later find out the gin is in fact distilled in a house and so there is no facilities to visit. Quite the adventure really. 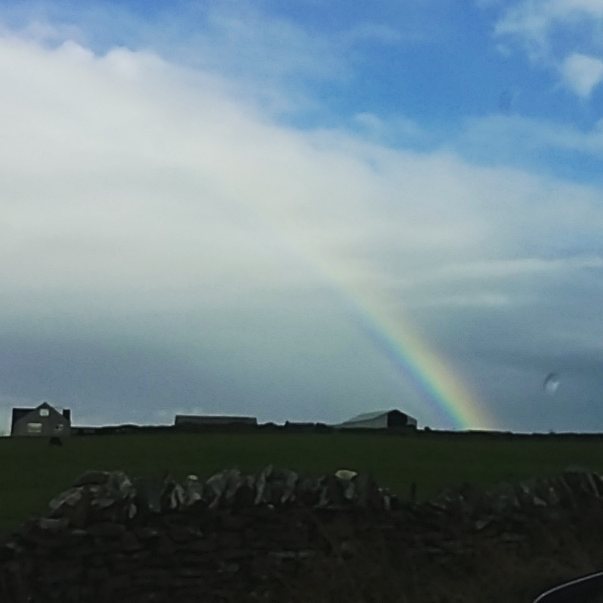 By this point we were pretty hungry and so made our way into Kirkwall for lunch. We hadn’t had a chance to explore much of Kirkwall yet but they have a beautiful old church which we wandered around and a nice shopping street. We opted for Helgi’s based on a tripadvisor recommendation. It was a traditional pub in the centre of town next to the water. We both ordered a Thai beef curry which we should have known to be a mistake given where we were but were hopefully optimistic. It was unfortunately, the worst meal we had in Orkney which was such a shame. The table next to us had stuck to the standard local pub classics and their food looked really great. From the safety of the warm pub and finally feeling dry again we checked Maeshowe availability and booked in for an afternoon slot before making our way along to the visitors centre.

Maeshowe is a chambered cairn and passage grave (albeit, none of us actually knew this prior to visiting). We rocked up to the visitors centre before being put on a bus for 3 minutes to the gate entrance and walked the final 5 minutes. From the outside it looked like a large protruding mound with a teeny tiny door. Our guide gave us a short background before we entered by ducking down and shuffling along the short passage into a square room with side rooms leading off. This was a burial tomb and so they believe the side rooms were used to bury the dead. You can see runic carvings all around the walls and our guide was fantastic at pointing these out and telling tales to really bring this ancient site to life. One of the highlights for me though was the bird next with baby chicks which the parents had chosen to build inside the cairn. The parents were constantly darting in and out bringing food for the chicks who then immediately started screeching for more. It was Springwatch live in action and felt really special. Of all of the sites we visited as part of the Neolithic Orkney world heritage site this was by far my favourite. 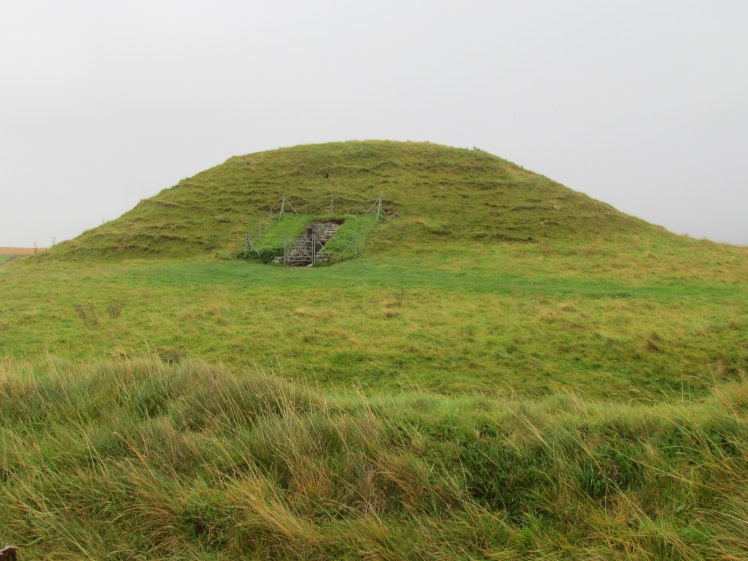 We didn’t have much daylight left by this point and so our final stop of the day was Skara Brae. This is north of Stromness and so took us to a different part of the island right next to another beautiful beach. One of the coolest parts about Skara Brae was the fact that until recently the entire settlement remain completely uncovered until a storm one night blew away the sand exposing the ancient delights held below. It is the largest of all of Orkney’s Neolithic settlements being an entire village and so comes with shiny visitor centre and all. Interestingly the standing stones (which is equally as interesting as Stonehenge) have nothing other than a small plague and are completely free. A much nicer visit in my view than the £18.20 famous stones covered in protective wire. I digress, so we arrived at Skara Brae, parked up and entered. Given it is the biggest attraction it is ticketed so after purchasing these, we wandered around their very interesting exhibit taking you back to Neolithic Orkney and explaining what we know of life 5000 years ago. They then have an interactive replica of the village which you can enter and explore since, unlike all of the other attractions, Skara Brae can only be viewed from current ground level – a sort of birds eye view. It was a little disappointing there was no guide for the site as I really felt that made Maeshowe, however, there were some staff members you could ask questions to if you wished to do so. You did have a chance to see the stone dressers and box beds in the 9 houses that made up the settlement and the views out to the beach and sea were gorgeous. Definitely worth a visit! Included in our ticket because we visited in September was a visit to Skail House which is right next to Skara Brae. It was sold as the finest 17th Century mansion in Orkney (maybe then perhaps?) the owner of which had initially discovered Skara Brae. It was really in my view and unnecessary add-on with the highlight being the gift shop which sold all 3 of the local gin varieties. 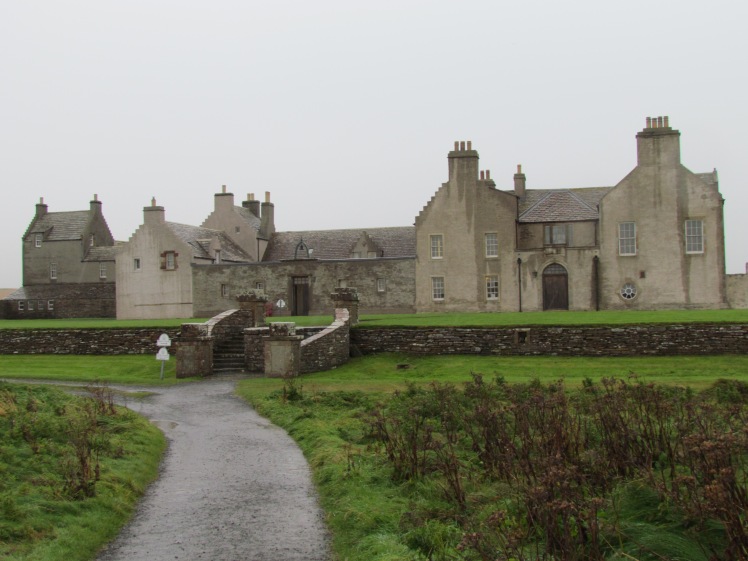 After a busy day of sightseeing it was back to Stromness for our final night. We decided to check out one of the only remaining places we hadn’t eaten in yet, the Royal Hotel. It was very nice and we managed to make friends with a cute local dog as well as working our way through all of the local Orkney gins. Controversially none of them for me stood out but they were enjoyable enough and you can’t say we didn’t try. Given we had to pack everything up the next day we made our way back home at a reasonable hour to get organised for our final day of diving. I was praying for a battleship!

One thought on “Orkney – Neolithic Sightseeing”